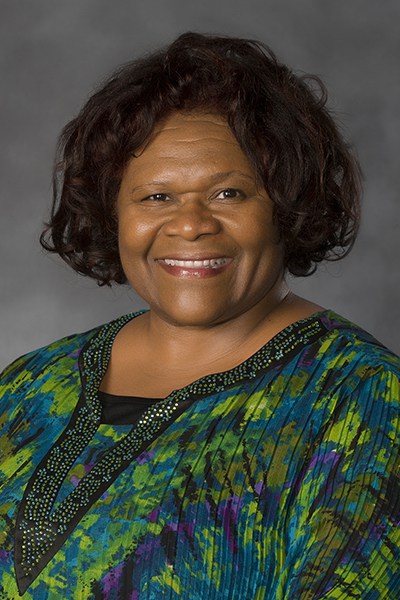 Charlene Crawley, Ph.D., is director of the Interdisciplinary Science Program and an associate professor in the VCU Department of Chemistry.

A native of Richmond, Crawley is the tenth of 13 siblings of the late Pastor Frank and Mary Crawley. Inspired by a fourth-grade science teacher, Crawley’s major ambition was to become a chemist. She graduated from John F. Kennedy High School (currently Armstrong High School in Richmond) in 1974. Working full-time through college she received a B.S. (1978) and M.S. (1981) degrees in chemistry from VCU and her Ph.D. (1986) in electroanalytical chemistry from the University of Delaware.

In 1987, Crawley became the first African American female Ph.D. chemist at the Research Center of Hercules, a then fortune 500 Chemical company in Wilmington, Delaware. There she supervised more than 15 chemists, technologists and technicians in research and methods development, problem solving, and quality assurance programs for products ranging from paper, film and fibers to inks, paints and rocket propellants. During her nearly 10 years of employment at Hercules, she served as a senior research chemist and group laboratory supervisor at the research center and also held the national office of team leader for plant and laboratory quality operations.

As the first Ph.D. in her family, Crawley recognized the added difficulty of finding role models in her field. Therefore, she became active in programs that encouraged educationally and economically disadvantaged youth to pursue careers in the sciences. While in Delaware, she was a member of the Science Alliance, which is an organization whose major goal was to improve scientific awareness and literacy in the schools and community where she served on the Human Resources Committee and the Committee on Women and Minorities. She served a two-year appointment as a post-adviser for the Boy Scouts Explorers Post, which sponsored hands-on industrial science programs for co-ed high school students. She also initiated a church and community tutoring program for area children in the city of Wilmington, Delaware earning her the Trailblazer’s Community Service Award in 1990.

Upon completion of a one-year sabbatical as a program officer in the Analytical and Surface Chemistry Program for the National Science Foundation, Crawley joined VCU (1995) as the first African American faculty member in the Department of Chemistry. She is currently associate professor of chemistry where she has served on about 20 graduate thesis committees, including serving as research mentor for five African American graduate students (three M.S., two Ph.D.), and nine undergraduate students, published ten peer-reviewed research articles, given more than 30 technical and professional presentations in her field, and garnered more than $800K in direct or supportive grant funding. In addition, she has served as adviser, advocate and instructor for thousands of students in the chemistry department and the Interdisiciplinary Science Program.

Crawley has maintained her long-term interest in initiatives to recruit, support and retain underrepresented and economically disadvantaged students in the STEM and health sciences. Having been a member of both categories, she is acquainted with the special challenges and perspectives of mentoring and teaching this population of students. She has served as mentor, educator and advocate during her participation in numerous diversity-focused bridge and outreach activities at VCU including: Project Bridge-Health Careers Opportunity Program, Acceleration, Summer Transitions undergraduate programs and graduate programs, such as the Urban Teachers Institute and the Virginia Mathematics and Science Coalition. In a similar capacity, she also developed and served as the director of the Emerging Scholars Program (ESP) in chemistry at VCU. This program was designed to support the education and retention of diverse student populations taking introductory math and science courses. Over its initial five-year history, performance statistics indicated that both majority and minority student participants of ESP earned on-average one-letter grade increases in their chemistry class performances. She has since designed and taught a workshop class with similar goals for students taking an upper-level chemistry course (CHEM 309: Quantitative Analysis), which yielded 85% success rates (‘ABC’ grade) for student participants, as compared to traditional course passing rates of 50-60%, on average.