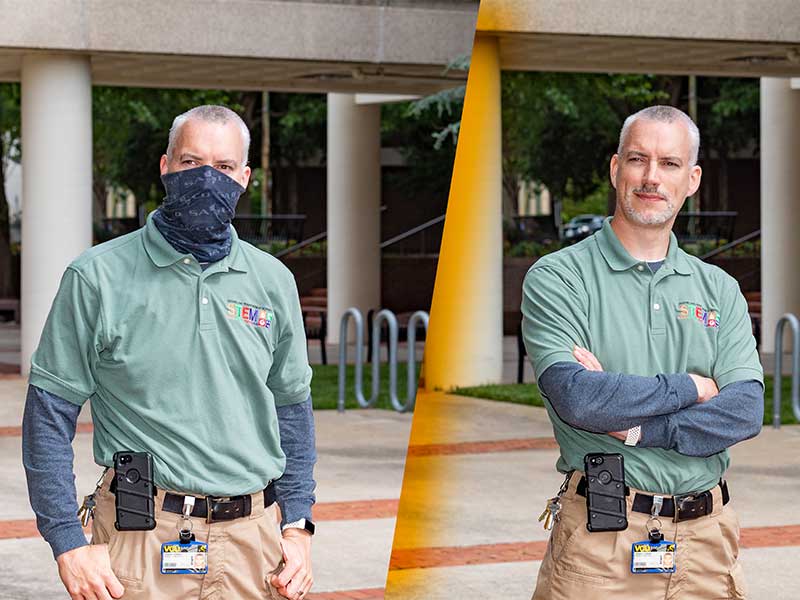 Telecommuting has become the norm for millions of people around the globe in the wake of COVID-19, but many don’t have that luxury and must continue to work on-site. Doctors, nurses, grocery store staff, police officers, postal workers and others have continued to work outside of their homes to keep the basic infrastructures of society in place.

Virginia Commonwealth University has its own essential – or designated, the official VCU Human Resources terminology – employees. Since late March, in addition to most VCU Health employees, more than 1,000 others have been showing up daily or weekly to keep the campus and health care clinics going until the rest of us can safely return. They represent a wide range of fields, from tech support to residence hall directors to librarians. VCU News asked 11 of them to share their experiences, one of whom is Joseph Turner, Ph.D., service associate professor and director of instrumentation in the Department of Chemistry.

Turner is responsible for overseeing a facility that houses roughly 30 scientific instruments used in chemistry and forensic science courses, as well as for research.

With campus shut down, he is one of three VCU employees who have been coming in most weekdays, one person at a time, to keep an eye on the devices, the labs and the buildings.

“The primary duties while the campus is closed is to ensure there are no labs that need immediate attention, we remain available to receive packages that were ordered before the shutdown, and to maintain the few instruments in my lab that would do worse if they were shut off completely,” Turner said.

Just because faculty, students and staff aren’t on campus, the facilities still need attention, he said.

“Early into the restriction, we had an air compressor failure,” he said. “Had we not been coming into the building doing lab and equipment checks, there could have been in excess of $40,000 of damage to the internals of multiple instruments.”

Performing his duties on a closed campus has required a bit of adjustment, he said.

“Days on campus would likely be much worse if it were night-shift duty, or if I never saw anybody when I was on campus. I typically do see two to three contract cleaners, and two to three facility and maintenance employees, which at least breaks the silence for a spell,” he said.

The requirements of protective equipment in a pandemic has also required adjustment.

“As a scientist, as a chemist, you are trained to never have your gloves on when outside of the lab, to never touch the doorknobs with gloved hands,” he said. “While coming into the building, it is odd, but that is exactly what I do. I swipe in, I use the electronic doors, or a gloved hand to enter the building. Every doorknob that I touch is touched with a gloved hand, but also likely wiped down with 70% alcohol. [With] the number of actions one must take just to open a door, once in the building I try not to leave until I am done for the day.”

Turner also has been working to help calculate student loads in labs to prepare for instruction when students return with social distancing measures in place.

“This has not only been done electronically, but also with physical measurements, and pictures to provide those individuals that are making the final decisions on course loads, pathways, etc., how we will be operating once we reopen the buildings,” he said.